Two of the biggest challenges facing the Voluntary Sector today are the public’s lack of trust in the sector and demonstrating impact. According to the Charities Aid Foundation (CAF) in their April 2019 report entitled “CAF Charity Landscape 2019”:

Most charity leaders think that the sector has been badly impacted by negative media coverage, [sic] and that … the value of charities is [not] always understood by the public. ... The challenge for any charity is to ensure it has the trust of its supporter base first and foremost.

In their January 2019 Third Sector Forecast, the Scottish Council for Voluntary Organisations (SCVO) revealed that a whopping

“84% of respondents think demonstrating impact will be a challenge.”

It’s a pretty safe bet that the rest of the Voluntary Sector in the UK feels similarly.

The two challenges go hand in hand. Broadcasting the amount and type of impact your charity has on its cause is an absolute necessity when trying to gain the trust of both the public and the government. It is hands down the best way to get people on board and involved because it builds empathy. You have to

Now, you may have heard the term “empathy” being bandied about a lot these days in relation to myriad concepts and processes, “the user experience” being one. That’s because creating empathy is paramount to anything else. It’s not for nothing that it’s the first step in the Design Thinking Process, a method used by the User Experience (UX) Design community that’s gaining outside popularity for solving business problems and the like — a method that is perfectly suited to tackling the problem of demonstrating impact to increase the public’s trust in the Voluntary Sector.

Put simply, it’s a creative, solution-focused approach to solving problems. Its focus on the solution allows — compels even — practitioners to think big, resulting in innovative solutions that address even the smallest of needs. The Design Thinking Process is an iterative one put in place to ensure that what is being designed is what’s actually needed and is both usable by and useful for the intended audience.

The process is a non-linear one and varies from project to project (and even between UX Designers), but it is usually some variation of: 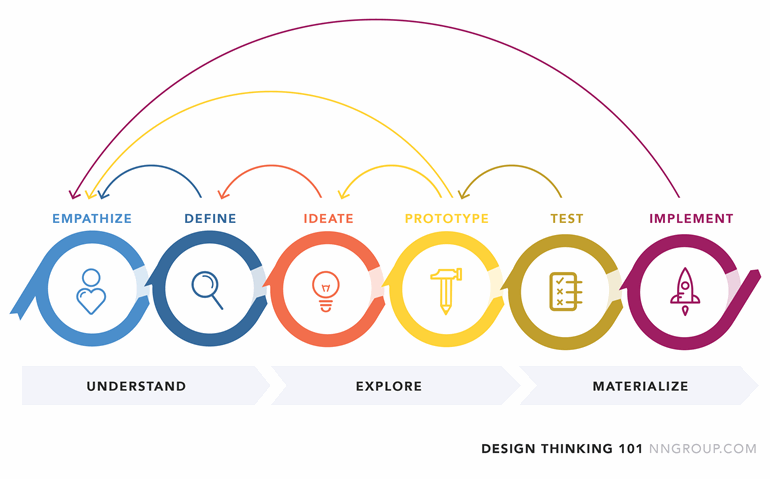 It’s the first stage — EMPATHISE — that is the most important, so let’s get right to it.

Before you do anything else, speak with your beneficiaries — the people who are (or are affected by) the reason your charity exists in the first place. Not only talk but really listen to what they have to say. Observe. Be mindful of their situation, their environment, and the way they speak their piece. In other words, take note of what they do, say, think, and feel. You'll wind up with a wealth of insights you can present to your stakeholders and supporters to demonstrate the impact they (and your charity, by default) are having.

Let’s consider for a moment this image taken from an NCVO blog post of an experiment done by the Charity Commission on the very topic of “trust in charities”.

It demonstrates the effectiveness of transparency in generating trust in a charity. The four different variations of a poster for a fictitious charity each have a different statement or illustration. In it, you can clearly see that the one with the graph illustration for their distribution of funds elicits the highest trust response of the four — a 63% increase in trust and a 52% increase in the likelihood of donating from the first poster! Think of the trust gains possible if you were to go beyond something so obvious and think outside the box!

Get your beneficiaries involved as much as possible in this stage of the Design Thinking Process. Yes, you want to have posters and web pages and loads of printed material that shows the good your charity is doing, but it’s been proven that UGC is trusted and consumed far more than most other forms of content. 90% of consumers have reported that they find it incredibly influential.

For any business with an online presence, UGC has quickly become a must-have asset. The benefit is two-fold; [sic] users enjoy having an active stake in the creation of content, [sic] and they rely on insights from other users when making a purchasing decision. … It allows consumers to speak directly to one another about the topics that matter most to them. Reviews, especially, have proven to matter very much to consumers.

User-Generated Content is a Trusted Resource
Most consumers are less likely to trust corporate advertising than they are to trust a recommendation from another consumer. However, nobody is going to trust a recommendation from a single anonymous stranger. Aggregate reviews from a wide cross-section of consumers gives [sic] the sort of feedback that truly influences purchasing decisions.

Let’s take that and translate it to the Voluntary Sector.

We’re now armed with this knowledge that people’s (read “the public’s”) trust in an organisation is incredibly influenced by UGC because of its perceived authenticity. So, from a psychological standpoint it stands to reason that by involving your beneficiaries, by giving them video cameras, let’s say, and letting them record their experiences of your charity, of the good work that you do, and then displaying those experiences for the world to see will more loudly and more vehemently demonstrate the impact you’re having than a thousand impact statements and pie charts detailing distribution of funds ever will! As a result, empathy skyrockets! Yes, these things are important to have and to show your stakeholders and the public, but you have to back them up with what we’ll now call “beneficiary-generated content”, or BGC. :)

Fight back with stories! | Have the numbers on your side, don’t fail to mention them, but don’t think that they are going to actually win the battle for you.

— David McRaney and Christopher Chabris respectively from the “You Are Not So Smart” podcast, episode 2: “The Illusion of Knowledge”

And don’t just look for those beneficiaries who will sing your praises ‘til the cows come home. Seek out the ones who also have not-so-good things to say and include those as well. Now, don’t go find “Mr. / Ms. / Mx. Kvetch”, but aim for someone who will give you an 8 out of 10, let’s say, and will put the other 2 out of 10 into perspective. Don’t feel like you have to edit out the bad stuff. Why? Because when given the choice, people are more likely to go with organisations they feel are being transparent and honest rather than the one that costs less however that cost is measured (i.e. money, time, effort, etc.). They then expect this honesty to translate to the rest of the experiences they have with the organisation. People trust transparency more than they do low cost — or in this case, pie charts! So, not only will you gain their trust but also their respect. You can use that mental model to your advantage in finding a solution to regaining the public’s trust.

As Baroness Stowell put it in publishing the most recent research, calls for transparency are ‘proxy for a more profound issue: the public want evidence that charities are what they say they are’.

— from Aiden Warner’s NCVO blog post entitled “Trust in charities hasn’t improved – What can we do?”

But my charity isn't people-focussed. What then?

As implied earlier, if yours is a charity that doesn’t exist to support people directly (maybe yours is an animal or environmental charity, for instance), don’t worry. There's always a connection to people, whether direct or indirect and, therefore, always someone with whom you can talk. People are going to be affected by the good you're doing, no matter what.

Spend time with the cause. Spend time with the animals in the shelters. Spend an afternoon at the beach with volunteers who are holding a “Beach Clean”. The more time you spend with the cause — your raison d'etre — the better your chances of truly understanding how to make a difference. You'll know better how to reach your staff, volunteers, and supporters, as well as how to foster those all-important feelings of empathy in each. First-hand experience (i.e. BGC) goes a long way in engendering empathy and sparking inspiration, so should be something you seek out on a regular basis.

Despite the many challenges identified throughout this year’s Road Ahead, and the phase of decided uncertainty that our country enters, the key message for charities is that they will be critical in holding the order together in the short term, and finding solutions to renewing and reforming it to ensure its survival in the long term.

— from “The Road Ahead”, the 2019 summary published by the National Committee for Voluntary Organisations (NCVO)

Be prepared for the long haul. It won’t happen overnight. It’s a time-consuming process but the rewards far outweigh any frustrations you may have on your journey.